“Made in America”. A misleading title for a disastrous Executive Order. 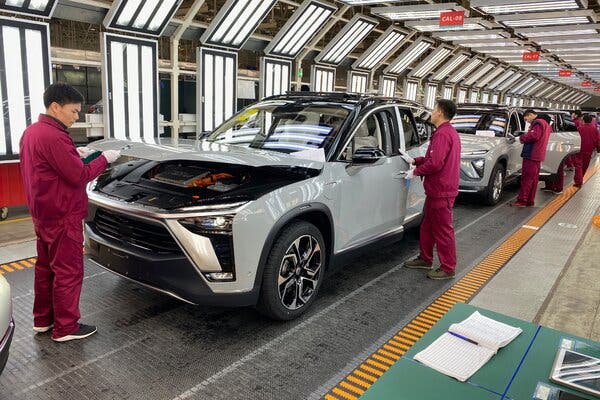 I applaud President Biden for standing up and making a public statement in support of US manufacturers.  Those of you closest to my parallelAdminstration know that placing a renewed focus on the reconstruction of American industry is core to my parallelPresidency.  It provides the basis for other key initiatives that will help rebuild a middle class in America, lifting many of our most vulnerable out from a life of minimum wage employment, and lessening America’s dependence on our ideological adversaries.  I could not have arrived at a better name for a more noble-intended executive order;  “Made in America”.

But agreement as to the name of the executive order is the beginning and end of my agreement with President Biden.

The federal mandate contained in the EO, has committed to replacing the entire federal vehicle fleet of internal combustion engines with electric vehicles, some 650,000 vehicles in total.  Because of this decree, General Motors, what was once the largest automaker in the world, followed suit on their commitment to electrify their entire vehicle lineup by 2035, citing the Biden Administration’s clear direction as the reason.

President Biden claims that this order will create 1,000,000 American jobs and make a huge step forward in the battle on climate change.

After a lifetime of working in the automotive industry myself, I am flabbergasted by this assertion.  I am desperate for someone with even more experience than me, with a higher level of access to inside information than I had, or a keener intellect than mine, to help me understand.  Because no matter how hard I try to come to a different outcome, I can’t…

President Biden is either outright lying, or has been grossly misled by his advisors.  In either case, the result is the same; the loss of incalculable American jobs and another catastrophic blow to America’s industrial self sufficiency.

While it may be boring to read, a basic understanding of electric vehicles and internal combustion engines is key for everyone to understand.  Please bear with me.

First, electric vehicles have no drive trains.  A drive train consists of the engine that makes the car’s power, a transmission that converts that power to torque, and a differential that converts the power and torque to motion (makes your wheels turn).  Each of these items are mechanical marvels.  Made of steel, iron, or aluminum, they are composed of thousands of individual precision components whose materials must be mined from the earth, purified in a foundry, where the molten metal is poured into castings, that are later precision machined, and ultimately assembled into the completed drive train.

By Federally mandating the electrification of vehicles, the actPresident has eliminated the need to design, engineer, and produce any of these items, or the tens of thousands of individual components that make them up.  That, in turn, eliminates the need for the employees who perform all of those tasks along the value chain, from the engineers, to the machinists, to the assemblers, to the janitors who clean the plants, and to the hundreds of suppliers who support them.  Incalculable numbers of jobs.  Entire industrial complexes, each employing thousands of semi-skilled and skilled workers all earning a great living wage, will all be gone.   The fallout in the State of Michigan alone is incomprehensible. The last thing the people of Detroit need to endure is another round of lost automotive production.

Almost more important than the acute pain of losing those jobs, we also remove tens of thousands of skilled workers and their invaluable knowledge and experience from the national industrial workforce.  History has shown us that when industries like this collapse, the skilled population often becomes disillusioned and leaves the industry, each time rendering America less and less industrially capable.

In addition to a national “brain drain” and loss of living wage jobs in many of America’s most impoverished communities, we will also lose the physical infrastructure that would normally have been used to produce the parts.  When I say infrastructure, I am referring not only to the facilities themselves, but the thousands of precision, multi-million dollar, CNC machines inside of them.

Machinery that takes raw materials and turns them into the precision components that make the drive train go.  Machines that could be called upon in times of national emergency to make other precision metal items, like components for tanks, light armor vehicles, and fighter jets, or durable life saving medical equipment like ventilators.

By eliminating the drive train, President Biden has rendered a huge part of what remains of the US industrial complex, obsolete.  Plants will close.  Workers will change careers.  And we will scrap or sell off critical machinery.

“Surely there must be some awesome tradeoff for the President to have made such steep sacrifices on behalf of the American worker, right?  If electric cars have no drive trains, what makes them move?  How does this make things better?”

The traditional drive train is replaced by electric motors and a large battery pack.  (This video does a nice job of explaining the engineering behind the vehicles in layman’s terms.)

“And where are those electric motors and batteries made,” you ask.

“When it comes to global automakers’ electric vehicle plans, all roads lead back to Beijing,” said Michael Dunne, a former president of G.M.’s Indonesia operations.

Simply put, the drive trains will all be replaced by Chinese-made electric motors, batteries, and components.

According to the NY Times, China is also the leading maker of big battery packs for electric cars, producing considerably more than the rest of the world combined. Chinese regulations required until a year ago the use of Chinese battery suppliers, instead of their mostly Japanese and South Korean rivals, for electric cars sold with Chinese subsidies. That forced multinationals to place huge orders with CATL, the main Chinese producer.

While American car manufacturer, Tesla, has fought to produce their motors and batteries using their own domestic workforce to protect their intellectual property, so far they have not proven capable of doing so without the financial assistance associated with selling carbon credits to other fossil fuel burning automakers.  In other words, Tesla can’t build their cars using American workers for a price the American consumer is willing to pay, without the cash injections they receive from selling CO2 credits to automotive competitors.  What will happen when the other auto companies no longer need to purchase those credits from Tesla?  Simple economics would suggest that Tesla would need to dramatically increase its prices to its car buyers or simply follow-suit with GM by moving production of motors and batteries to China as well.  Time will tell.

If we really want to get serious about reviving the American industrial complex, read here for my parAdminstration’s detailed plan.

I realize for some readers, the economic destruction I outlined above are just examples of collateral damage in the battle against climate change.  I get it.  I am passionate about the environment, too.

There is no doubt that the President’s order will result in a reduction of noxious carbon emissions that are at least partially to blame for the globe’s warming.  However, I have made my position, and the science behind it, abundantly clear…  even if the entirety of the United States reduced carbon emissions to zero, it would have virtually zero impact in stemming the tide of global warming.  The amount of pollution produced throughout the Eastern Hemisphere is just so disproportionately worse.

In 2019, China alone produced 11.5 billion Gigatons of carbon dioxide, while the United States produced less than half, 5 Gigatons.  Don’t believe me?  Read here or here.

Further, President Biden’s order will eliminate CO2 pollution derived from passenger vehicles only. According to the EPA, only 14% of the 5 Gigatons of CO2 emissions produced in the US annually comes from the total transportation industry, including over-the-road trucking,rail, and air travel.  This means that President Biden’s order will reduce only some portion of the 0.7 Gigatons of CO2 emissions attributable to transportation, while China continues to produce 11 Gigatons annually, with no end in sight.

I fail to understand how the complete decimation of an industry, and increased dependency on unfriendly foreign powers is justified for such an incremental improvement.  I have not even delved into the many other available engineering solutions that could have made big improvements to vehicle emissions without the economic and societal fallout of electrification.

Seems to me that the only people I see benefiting from these actions are members of the Biden Administration and their families who had the forethought to purchase massive amounts of stock in Tesla, and members of the Chinese communist party who have just assured ongoing American dependence.

← A chance to face hypocrisy in the mail in voting debate.